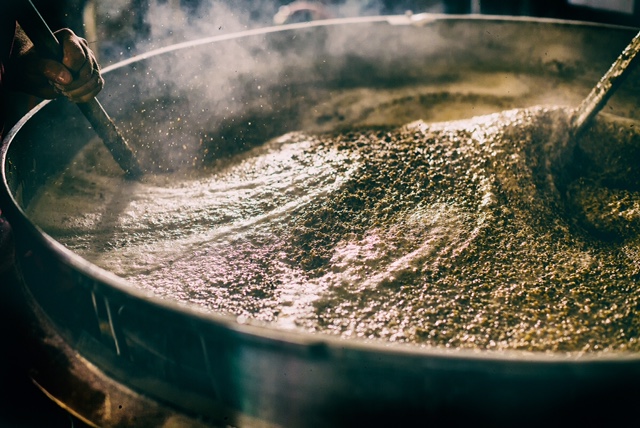 Although a lot of different things go into running a successful brewery, perhaps the most important aspect of any brewery is the brewing team. That’s because when you wipe away the rest of the craft beer culture, you are really left with one thing…the quality of beer. It doesn’t matter how cool the tasting room looks, who’s pouring the beer or what kind of glass is used to serve the beer. If the beer isn’t great, then it’s just another brewery in a packed-house industry that some say is already reaching its tipping point. That’s where talented brewers come in. They are the backbone of any good brewery and responsible for creating the delicious elixir that we have come to love so much.

Here at Thorn Street Brewery, we stand behind the quality and taste of our beers and have these three guys to thank for it. So without further ado, here are the brewers responsible for some of your favorite TSB beers…

Eric Shelley is the newest member of the TSB brewing team but he is already making quite an impact. He began brewing in 2011 when he was working as the draft tech and beverage manager at Toronado, an iconic bar in San Diego’s craft beer scene. There he collaborated on many of their anniversary ales while perfecting his own beer recipes on his home brew system. Eric started competing in home brew competitions in 2013 and has amassed over 35 medals since then.

Some of his more prestigious wins include three medals at the 2015 AFC Competition, where he won gold for a Krystal Weiss, silver for an imperial IPA, a gold for an IPA, and “Best in Show” for that IPA, called Bart’s Bully. He also won big at last year’s Master’s Championship of Amateur Brewing where he won a gold medal as well as the Grand Master Award for his imperial IPA. At the Pacific Brewer’s Cup last year, Eric pulled down another three gold medals for his session IPA, ESB and grapefruit blonde ale. Here at TSB, Eric has been instrumental in brewing both our award winning Alpenglow Imperial Red IPA and the newest beer on the block, OG HighPA Session IPA. Speaking of the recent World Beer Cup win, Eric says he feels “a great sense of accomplishment for the brew team at TSB.” He adds, “Cheers and thanks to everyone that has been supporting the TSB beers and brewery. We really appreciate it.” Look for more exciting beers to come from Eric including the recent double IPA that he brewed for Toronado’s anniversary.

Scott Smith came to us from Ballast Point’s Home Brew Mart, but his love affair with craft beer started back when he was in high school and working in a liquor store that had a “microbrew” section. He credits Sierra Nevada and Pete’s Wicked Ale for introducing him to the full-flavored style of beer that is his profession now, but he caught the home brew bug when he became friends with Lee Chase, brew master and owner of Automatic Brewing Co. and Blind Lady Ale House, who at the time had just started brewing at Stone Brewing. Lee show Scott the process of brewing and the still slightly-under-age home brewer was born.

While working at Home Brew Mart, Scott’s team was responsible for brewing Ballast’s first brett beer. Brett is a type of wild yeast known for creating bold and unruly flavors in brews. It was an all brett IPA with strong pineapple characteristics that was a delicious, funky success.

Although Scott doesn’t have time to brew at home anymore, the recent EM-50 IPA was a home brew recipe of his and he was the head brewer responsible for the WBC winning Alpenglow. When asked how he felt about the recent WBC win, Scott had this to say…

“It feels great to have won a silver at WBC. There are a lot of breweries in San Diego now and a medal makes us stand out that much more and adds a legitimacy so people know we are the real deal and take what we do seriously. GABF is next, and I am working on a few things to enter. Other than that, I am just really excited about the new place and being able to have our beer in liquor stores when it is all up and running.”

Though Scott has been out of the brewery over the last month because of a foot surgery, Jeremiah May has stepped in to help out and has become a valued member of the brewing team. This is Jeremiah’s first stint brewing but has made a name for himself in San Diego as both a experienced boat captain and in the San Diego Disc Golf scene, where he was the Mature Champion twice at Morley Field.

Eric is one of the founding brewers here at TSB. He started the brewery with his childhood friend and fellow home brewer Dan Carrico (who now heads up the sales team) and Dennis O’Connor, the San Diego Taxman and owner of the home brew store that resided in the spot that is now the brewery. He started home brewing seriously six years ago when he brewed the first batch of Relay IPA. The recipe has had a “couple of tweaks and reboots since then, but it’s really not that different from the original recipe.”

Under Eric’s leadership Thorn Street Brewery has built a name for itself as a quality craft brewery that is known for a wide variety of beer styles and innovative recipes. The brew team is never afraid to try something new, as evidenced by the recent OG HighPA Session IPA (4.20% ABV) that was released, using cannabis extracts to flavor the beer while adding no THC.

Next on the horizon for the brewing team will be moving the 7 barrel process to a much larger brewing system at the Barrio Logan production facility, which is still under construction. “Man I’m super excited to get the Barrio Logan brewery up and running,” says Eric, “it will be a huge task, but we will be able to make beer more consistently and on a bigger scale.  I’m also very excited about some sours and barrel aged beers that are coming out soon. Stay tuned for more, but we will have a Geuze style sour, as well as Bourbon barrel aged Alpenglow and Dark Tsar Imperial Stout coming out soon!”

The next time you are at the brewery make sure you raise a glass to the guys who created the beer you are about to drink. Cheers to the talented and dedicated TSB brewers!