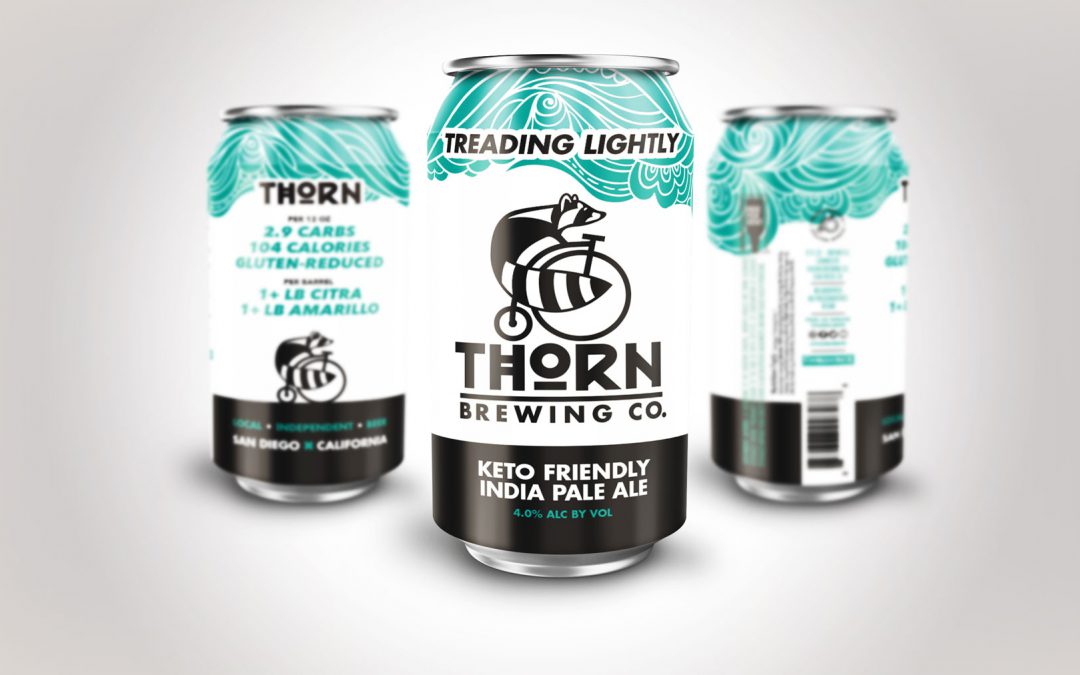 The words “low-carb” and “IPA” are not often seen together. In fact, when asked, most people can only come up with one low-carb beer in general and that’s Michelob Ultra. Recently, the Keto diet has been gaining popularity as many people have found success in losing weight by following its low-carb ways. Unfortunately for many keto beer lovers, they have either had to give up drinking beer or carefully budget one beer in that might take up their carbs for the whole day.

Luckily, our brewers have been working on something special for all of the carb-conscious beer drinkers out there. Treading Lightly is an IPA that’s both full of flavor and light on carbs. The secret is using amyloglucosidase enzymes which can be used to degrade starch polymers and maltose to glucose in the beer creating a low carb beer with a decent ABV still. This IPA is bright, crisp and very dry. The Citra and Amarillo hops burst through your palette creating a beautiful session IPA that rings in at about 104 calories for a 12 oz can and just 2.9 carbs while still maintaining a 4.3% ABV. As an added bonus, the beer is Gluten-Reduced making it easier for those who are sensitive to gluten.

Thorn brewmaster, Eric O’Connor, had a lot to say about Keto, low-carb diets and his philosophy on brewing a beer that everyone on any diet can enjoy:

“The concept of the keto diet is not necessarily new. Basically, similar forms of the diet such as Atkins, South Beach and more recently, Paleo, were all slightly different forms of Keto. Keto, short for Ketosis, basically centers on the science that in the absence of enough carbohydrates, your body uses fat for fuel. This is very useful for weight-loss since the most efficient way your body gets energy is to burn sugars. If you eat them directly, however, you will store the rest as fat, which can be difficult to burn off if your body has access to sugars.

Your body keeps a sugar reserve in your liver in the form of glycogen and in the absence of dietary sugar, it will burn that until it is consumed, at which point it will start burning your fat for energy. It takes little ‘effort’ for your body to switch back and forth between dietary fat and burning body fat, whereas there is a lag between consuming sugar and then switching to fat. It usually takes the average person 3-4 days of eating under 50 grams of carbs per 24 hour period and then under 50 grams per day afterword to remain in ketosis.

Atkins and Paleo diets are different in that they may replace carbs with proteins but are not necessarily high-fat diets. While alcohol technically takes you out of Ketosis, it does only long enough to burn the alcohol, then your body immediately starts burning fat again.

It should be noted that Keto is not healthy for everyone all the time, and it’s always wise to consult one’s doctor.  We also do not claim that a light, lower carb beer is a healthy diet food. But if you do want a real tasting IPA that will likely keep you burning fat if you limit other carb sources that day, our new beer could be for you.  It’s also just a damn tasty beer for those not on a diet but looking for a lower ABV option that’s not a lager.”

Treading Lightly IPA is available now in all three Thorn tasting rooms on draft and will soon be available in cans along with our other core beers. Now you don’t have to give up something you love to also achieve your weight-loss goals…Treading Lightly is here for you.