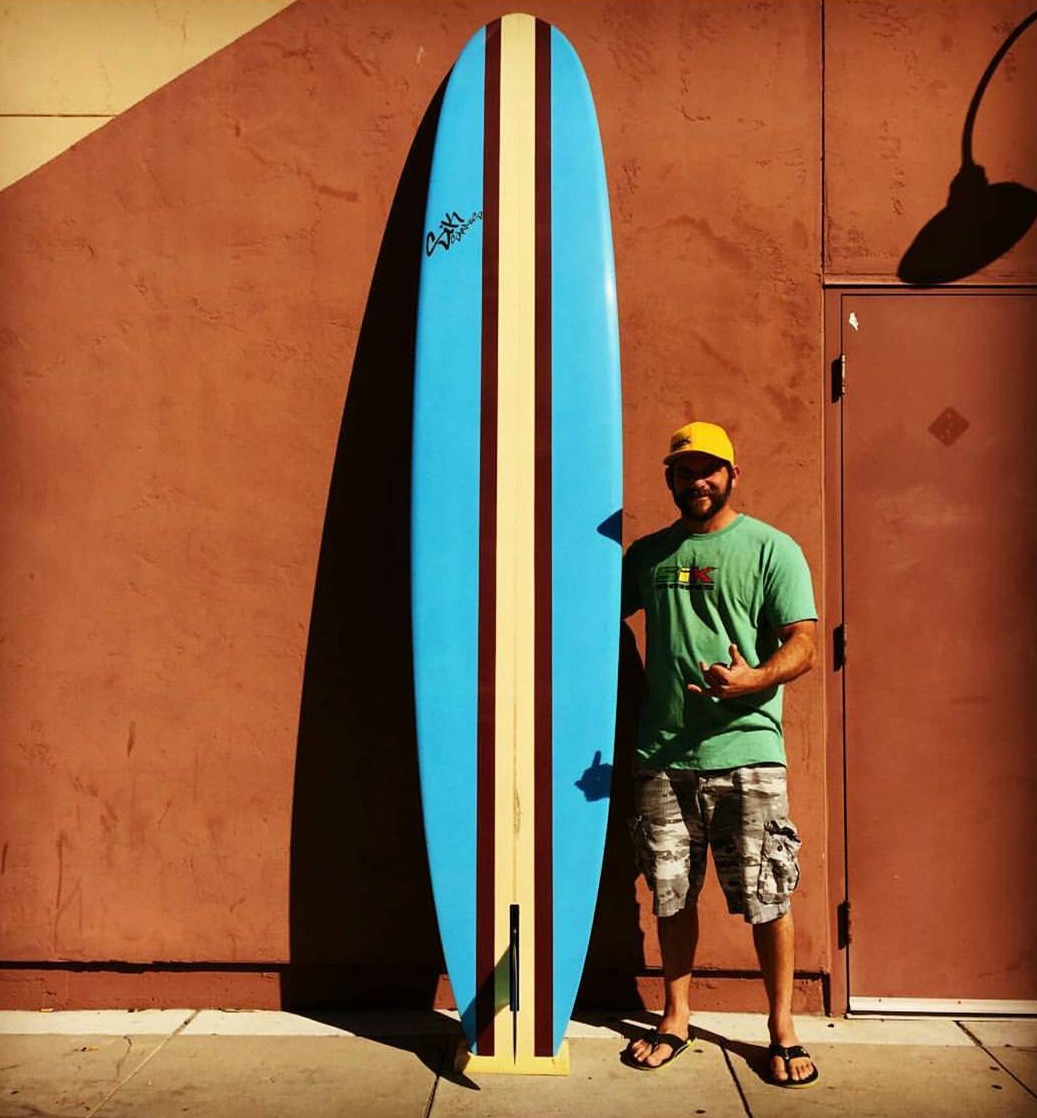 Coming off of our World Beer Cup Silver medal, we realized that we have a lot to be thankful for over here at Thorn Street Brewery. Not only do we have incredibly delicious beer, but we also have amazing people working for us here at the brewery that are big winners in their own lives. We thought we would take the time to celebrate the wins that our TSB family has had over the last couple of months…

Scott is both beer-tender and brewer at TSB. He was brewing full time when last year he decided to pursue his dream of shaping surfboards and started his company, Sik Shapes. His 2nd place win in the recent OB Pier Surf Classic was a perfect example of the hard work and dedication he puts into his craft. The funny thing about this win was that Scott never intended on entering this surf competition, or any for that matter. While in Mexico with TSB a few weeks back, his friend entered him in the contest and paid his entry fee. Scotty isn’t a competitive surfer by nature, instead he surfs to “clear (his) mind, to exercise and to enjoy nature.” This contest was his second one ever and the first one in the last 24 years and he’s looking to enter more surfing competitions in the future.

Not only does Scott brew some of our specialty beers (most recently Leggo My Keggo a beer made with waffles and maple syrup) but you can also find him beer-tending at our tasting room Tuesdays and Friday nights, offering up his quick wit and dry sense of humor, free of charge, to TSB patrons.

Ryan is known for being a nice guy as much as he is for his piercing baby-blues, here at TSB. He beer-tends as well as lends us his skills as a behind-the-scenes Social Media/Marketing rockstar. His recent win was with the San Diego Skates, a Senior A minor hockey club based in the greater San Diego, CA metropolitan area. Although he has been playing Right Wing on this team for only two years, he has been playing hockey since he was in 3rd grade and has always had a dream of playing in the pros.

The cool thing about Ryan’s big win is that he has helped the San Diego Skates win back-to-back championships in his two years of playing with them, which is a first for this league. You can find Ryan at TSB beer-tending Tuesdays and Fridays, so stop in and say congrats next time you are in!

Paulina is the newest member of the TSB team but she has started out with a bang! She has been training in mixed martial arts for almost 8 years. She has trained in Muay Thai, Boxing, Judo, Brazilian Jiu Jitsu, Greco Roman wrestling and freestyle wrestling. She is currently under contract with Combate Americas which airs on NBC Universo and UFC FightPass. Paulina fights at atom weight and she recently fought at Exchange LA in Downtown LA and won her fight. Not only does she have a blue belt in Brazilian Jiu Jitsu, but she has also spent time in Thailand to learn and compete in Muay Thai. Competing at this level is no joke and she spends 18-20 hours a week training, year-round. She currently trains at Alliance Training Center, which is considered one of the best gyms in the world, home to many UFC & Bellator fighters and many championship titles.

Paulina is definitely the one you want backing you up in a street fight, should you ever find yourself in one. You can hang with Paulina at the brewery pouring beers on Thursdays and Sundays, just don’t give her any lip!

We are sure some of you have noticed our kick-ass graphic design over the last year or so and we have Brittany Lang to thank for this, a local, award-winning, graphic designer and marketing extraordinaire. Britt has always loved art and grew up in the newspaper industry in Arizona. She tells us she was “born with ink under (her) nails.” and she “dreams about design 24/7.” In March, Brittany’s talent was rewarded when she won a Silver medal at San Diego’s Addy Awards for her Women in Fashion and her work was displayed at the Westfield Mall.

We are so proud of her successes and are lucky to have her on our team…look for more creative designs from Brittany as we continue to grow!

Winning a silver medal at one of the most prestigious beer competitions in the world is no small feat and we are so excited for our brewers that Alpenglow (December Nights in the competition) won silver in the Imperial Red Ale category. Head Brewer, Scott Smith brewed the winning batch of Alpenglow, along with TSB brewer Eric Shelley, who is well known throughout San Diego for his home brew medals. This superstar brewing team puts their heart and soul into each brew and can often be found tossing back a pint at the bar and chatting up customers at the end of their work day. When asked how the big win felt, Brewmaster/Co-owner, Eric O’Connor said…

“It feels great, I mean we are all local kids that grew up here, and have watched our neighborhood transform from a sleepy San Diego neighborhood into what appears to be a booming craft beer and slow food scene.  Of course it’s a great transformation but a lot of the businesses are owned by investment groups that own multiple businesses and out of town interests etc….so it’s cool for us as SD natives to bring this one home to the hood.  I mean just 4 years ago we were all home brewing and our brewery was our home brew store.  We really didn’t think we would be bringing home a medal like this, but I guess it just goes to show that it isn’t the size of your brew system that matters….”

We are pretty sure that drinking TSB beer is what caused all of these wins, so stop on by for a pint soon and uncover your inner-winner too.