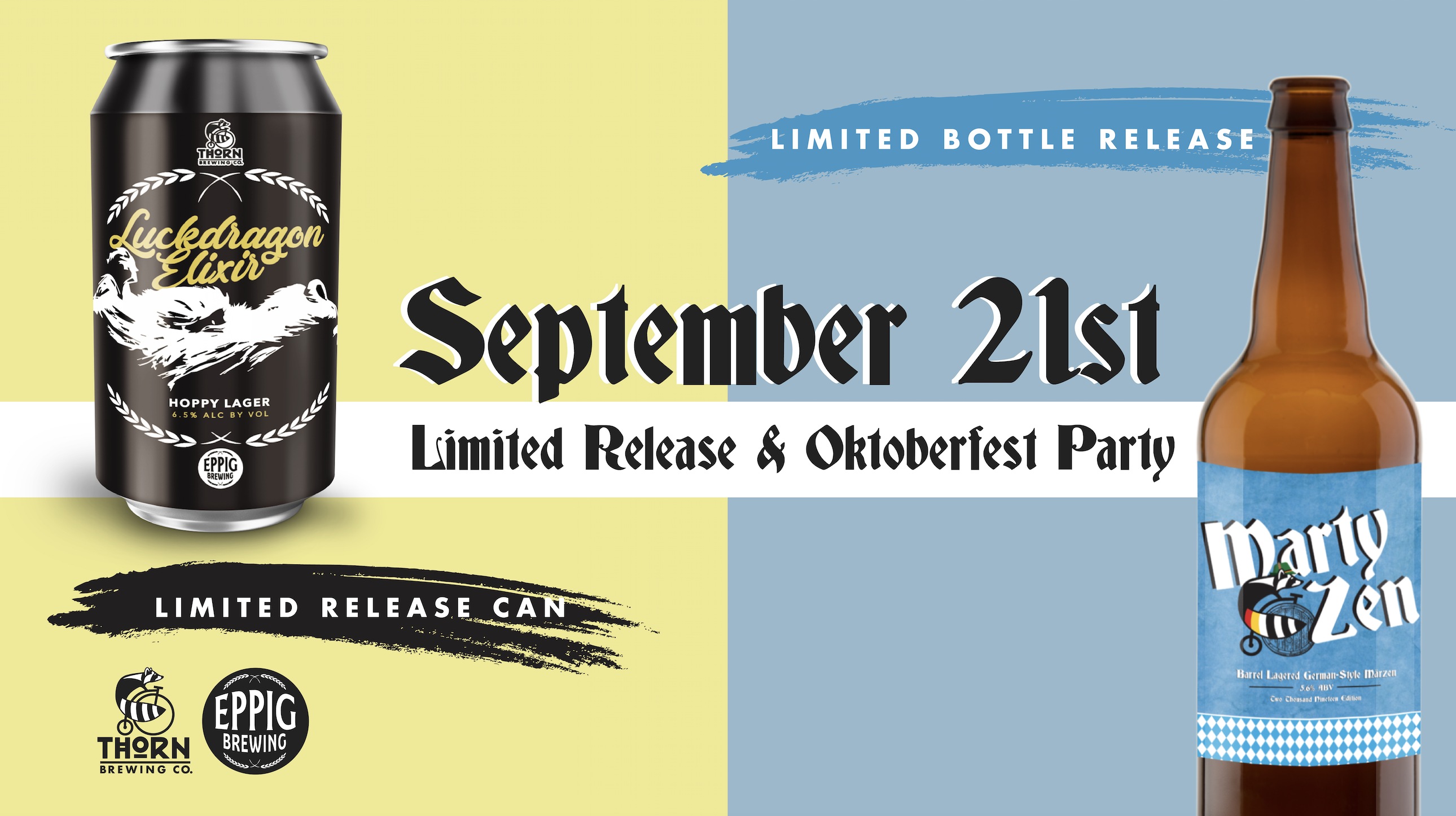 Join us for a triple-tasting room release AND Oktoberfest Celebration on Saturday, September 21st at 12 pm! We will be releasing our Barrel-Lagered Marty Zen Marzen at Thorn Barrio Logan, Thorn North Park and Thorn Mission Hills in bottles as well as our non-barrel lagered Marty Zen on draft. We will also be releasing our collab beer with Eppig Brewing, Luckdragon Elixir on the 21st at the Barrio Logan location only!

We will also be celebrating Oktoberfest at our Barrio Logan location with German-themed food from Caliano by Spinelli and will have Oktoberfest games kicking off at 1 pm including hammerschlagen, stien holding competition, keg holding competition and more! Win prizes, fame and glory and drink some damn fine beer while you are doing it!

Here’s the info on the beer releases:

The term Märzen comes from a time when German beers were brewed only during the colder months of the year due to lack of refrigeration. This style was typically brewed in March (Märzen) and then stored, or lagered, in wooden casks deep inside caves only to be tapped in the fall for the Oktoberfest celebration. At Thorn, we wanted to honor these traditions by recreating this magic with modern technology.

This barrel-aged Märzen was brewed in early March and then it took a short nap in Pinot Noir barrels inside of our cold box before being blended. The result is a beautiful, unfiltered, dark amber lager with notes of dark dried fruits and fresh Bavarian bread. It pairs exceptionally well with pretzels, sausage, and lederhosen. Prost

This beer is close to Fantasia with notes of orange marmalade, Meyer lemon zest, white wine grapes, honey, and almond. “Never give up and good luck will find you.”

Marty Zen – Traditional German-Style Märzen – 5.6% abv (all three tasting rooms)
Hops: German Tettnang
Reddish-burnt orange color with a tan head, and brilliant clarity. Aromas & flavor of fresh-baked Bavarian bread, hints of plum and subtle toffee. This beer was brewed as traditional as possible using modern technology. Everything about this beer is German, the malts, hops, yeast, step mashing, non finings, no filter, just extended cold lagering time; only the water used wasn’t German. We brewed this beer in March(Märzen) and have been cold lagering it in steel for 5 months before it was blended back together, carbed, and packaged.