A Year In Beers 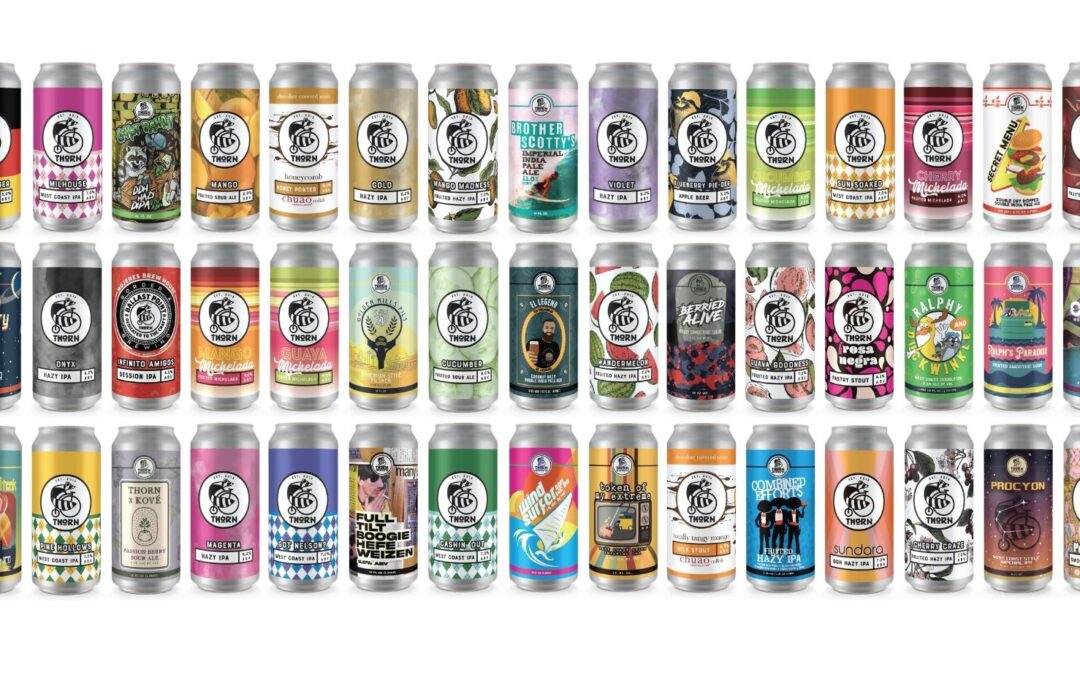 2021 was an exciting year at Thorn Brewing. First, we brewed just over 8000 barrels of beer, more than any other year so far! Our canned Michelada became our 3rd best-selling beer in its first full year, and finally, we brewed more new beers than in any previous year. In fact, we ended up with a total of 56 beers brewed total for the year, including stouts, lagers, porters, smoothie-style sours, micheladas, pastry stouts, and a plethora of hazy and West Coast-style IPAs.

This was our second year brewing Michelada and we added a fruity twist! We used seasonal fruits including, mango, guava, cucumber, and cherry. It was a toss-up between guava and cucumber for which was the tastiest and low and behold, those two are the ones that are coming back for 2022 and being joined by newcomers, tamarind and lychee!

It’s So Hard To Say Goodbye…

We were certainly sad to have to say goodbye to Treading Lightly, our low-carb, low-cal IPA. While it certainly had rabid fans, the numbers don’t lie, and we had to table the beer for now while we make room for new core beer, Tepache Sour. Luckily, you can still often get Treading Lightly by the pint, crowler, or growler at Thorn North Park. We also said “see-ya-later” to Hopster Pot Hazy IPA in 12 oz cans but never fear, look for it to be released in 2022 in 16 oz cans!

From the Mouths of Thorn:

Even with such a deep beer schedule, there were certainly standout beers. We asked the Thorn team which beer was their favorite in 2021 and why and here’s what they said:

Totally Tangy Mango Chocolate Stout. Making a beer with mango and chocolate sounded impossible. But it had great chocolate flavor and the mango came out like fresh mango. It was not like any beer I have had the flavors work so well together.

Ummmm I’d say my favorite was probably Wind Surfer DDH IPA because it was clean but also a full flavor IPA.

Hmmm…Cucumber Michelada. The cucumber added a garden salad feel that the other micheladas couldn’t quite match. It was light for summer and had an added crispness.

Definitely Infinito Amigos Session IPA (collab with Mujeres, Ballast Point and Border X). It’s a great light and refreshing session that has collaboration at its core and amplifies all the voices in the SD beer scene.

Cucumber Michelada. Micheladas don’t exist in Boston and I’ve loved them since Jay made me my first one at the 91x flophouse during Coachella. Before we started making our own I’ve never had a good premade one. And the Cucumber one was an extension of what I love about our michelada but had a ridiculously aromatic Cucumber presence that I couldn’t get over.

Milhouse IPA dominated my fridge space for weeks. Such a crushable West Coast IPA with just enough bitterness to bite back! It was so much fun recommending it to customers and watching them come back for pint after pint of it! Also, brewer Josh (Coombs) dropped a classic this year (Milhouse IPA), and also I approve and lovingly support all things done at Thorn Brewing by people named Josh!

This is a tough one. The Pine Hollows IPA that just came out is insanely good. A super example of a clean, West Coast-style IPA. But before that one came out, I was a Windsurfer DDH fan. Another uncomplicated IPA but full of hop flavor that doesn’t linger on your tongue.

It’s a toss-up between the Golden Hills Pils and the Windsurfer DDH IPA. I like beers that are easy to drink that I don’t have to think about. Both of those beers fit that mold perfectly.

Eric O’Connor: Thorn Founding Brewer and Head of QC and Research and Development

The first one that comes to mind is the Mango Sour or the Guava Sour. The guava came out right before we flew to Hawaii and it was the first big trip we went on since covid. It was our girls’ trip and it was the perfect beach beer + road soda 😂😂. Mango Sour was just my favorite flavor-wise, but no cute story behind it.

Favorite beer was the Infinito Amigos IPA because…collabs in general, plus the beer turned out really tasty.

​​My go-to beer has been Relay IPA for years. If I’m behind the bar and patrons want to have beer shots to toast someone or something, I’m doing Relay. Then Milhouse IPA comes out. Of course, I still love my Relay, but when Milhouse is on tap I’ll take that because it’s delicious and I feel like I want to have it while I can. I know Relay will be available year-round. When there’s a beer that comes around that can hold a rival to my favorite beer, I gotta have it because I know it’s not always going to be around. Milhouse is my favorite beer from 2021.

My fave beer we did this year was easily Windsurfer IPA. Just a super clean, old-school West Coast IPA.  I wish we did it year-round. Pine Hollows IPA is a close second.

Windsurfer IPA! A great hoppy flavor without being essential! Perfect for the beach, the park, or even at home. I also LOVED the El Legend Coconut Hazy IPA because it sounds like two things that shouldn’t go together and then ended up just tasting like vacation. Everyone that tried it ended up getting a second one.

My favorite beer is Cashin’ Out for the obvious reasons. It’s my hop selection and my contribution to the Essential IPA Series. I also chose the name and a portion of the proceeds went to Pink Boots Society of San Diego. But, I will say that Windsurfer DDH IPA was amazing and probably one of the best beers we released this last year.

So for anyone who is counting…Windsurfer DDH IPA got mentioned 6 times, Pine Hollows IPA got 3 shoutouts, Cucumber Michelada, Infinito Amigos, and Milhouse each got 2 votes.

We are super excited to see what 2022 has in store for us. We are putting out even MORE new beers (64 on the books!), focusing on Michelada growth, and working to expand the areas that Thorn beer is available. Cheers to 2022!