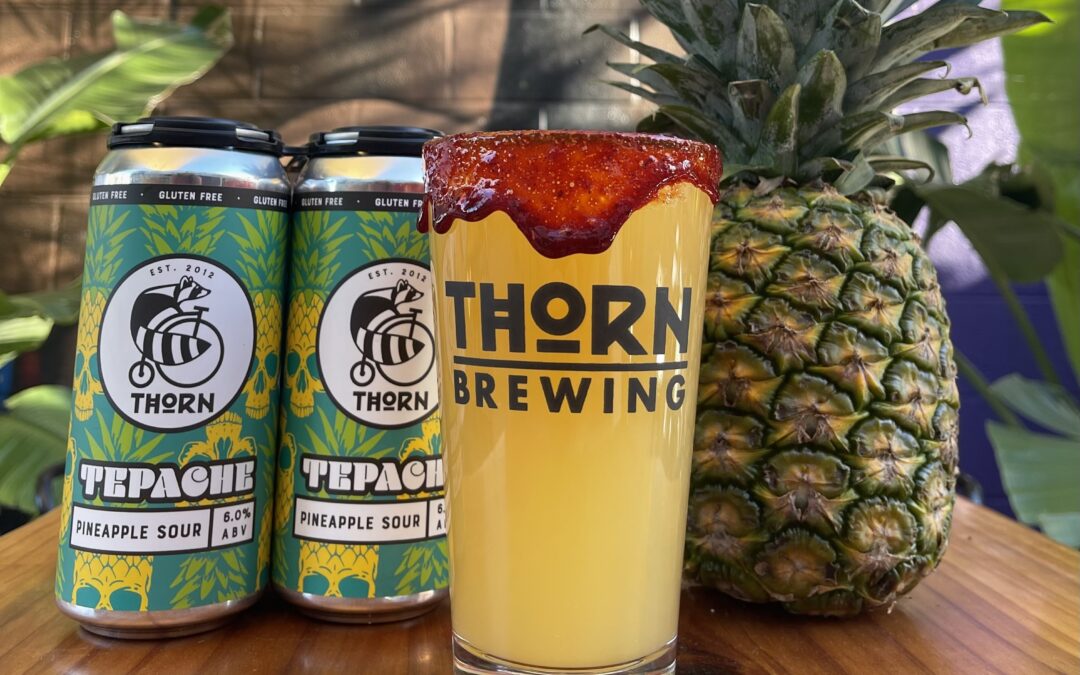 Whenever we can offer a “not-beer” option here at Thorn we are thrilled and right now that’s Pineapple Tepache Sour. Our Tepache Sour was just re-released this past month and we figured it was the perfect time to give people new to tepache a quick history to bring you up to speed on this delicious and light drink.

Traditionally, tepache is a Mexican beverage made from fermented pineapple. It has a slightly sour and effervescent taste and is often sweetened with sugar or honey. The origins of tepache date back to pre-Columbian times, when the native people of Mexico fermented fruits and grains to create alcoholic beverages.

The name “tepache” comes from the Nahuatl word “tepiatl,” which means “drink made from corn.” In the past, tepache was often made with corn, but over time, pineapple became the main ingredient. This is because pineapples were introduced to Mexico by the Spaniards and quickly became a staple in Mexican cuisine.

To make tepache, the skin and crown of the pineapple are peeled and discarded, and the remaining flesh is cut into small pieces. The pineapple pieces are then placed in a large jar or container and mixed with water, sugar, and piloncillo (unrefined sugar). The mixture is left to ferment for several days, during which time the sugar ferments and creates a low-alcohol content.

Tepache is commonly served cold and is often enjoyed as a refreshing drink on hot days. It can also be enjoyed as a mixer in cocktails or as a base for other beverages. In some parts of Mexico, it is also served warm with a sprinkle of cinnamon on top.

In addition to its delicious taste, tepache has several health benefits. Pineapple is high in vitamins and minerals, and the fermentation process helps to break down the fruit’s nutrients, making them more easily absorbed by the body. Tepache is also low in calories and can help aid digestion due to the probiotics produced during fermentation.

Tepache has a rich history in Mexican culture and continues to be enjoyed by many today. It’s just becoming popular stateside, though most tepaches available here are non-alcoholic at this point. Our tepache is delicious and slightly sour, with an ABV of 6% which gives it a bit more alcohol than most. It’s also gluten-free and lower in sugar than most beers. We invite you to try our Pineapple Tepache and let us know what you think!