Women’s Work: Brewing Then and Now 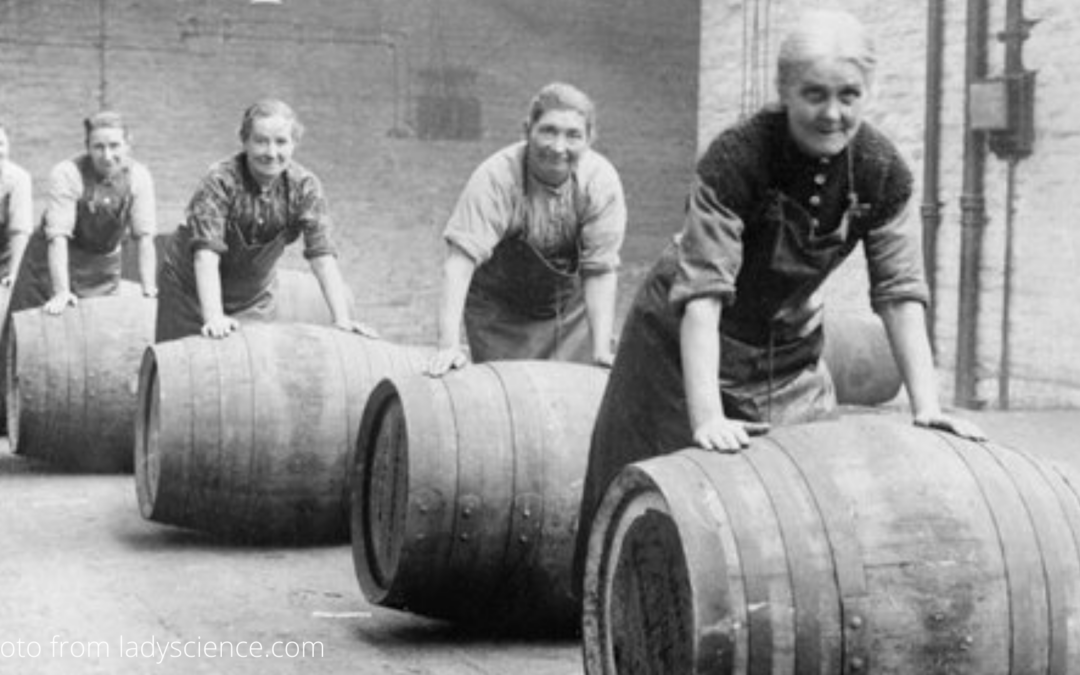 Who brews your favorite beer? Not the brewery, but the person. If you picture this person, what do they look like? You’ll probably think of a mostly white Gen X or Millennial dude with a beard and you would most likely be right because approximately 92.5% of craft brewers are men, with 88% of those men being white. It wasn’t always this way, however, because brewing used to be “women’s work” yet at some point in the last 500 years that all changed.

The first historical records of beer are from ancient Mesopotamia where beer was often brewed by women because it fell under the umbrella of domestic tasks. Beer was considered a calorie and nutrient-rich drink that was also brewed as a way to preserve grains as well as used for religious ceremonies. During the Middle Ages, brewing was still primarily a women’s job because the long and complicated process of brewing could be done at home while women tended to children and other household duties while many men often worked outside the home and couldn’t be at the whim of a brew kettle. In fact, brewing was primarily done by women up until the Industrial Revolution.

How did this switch from female brewers to male brewers happen? Judith Downie, the special collections and history librarian at Cal State San Marcos, as well as curator of the Brewchive, a beer-centric special collection that works to cover the history of the San Diego beer industry, explains the switch:

Some differentiation began before the Industrial Age as nuns and monks both brewed but gradually ‘monks brewed and nuns sewed’ as the women were expected to produce embroideries and fabrics for religious use where the monks did more farming, etc. This differentiation became embedded in European culture as the Industrial Age developed. As industry developed, brewing was among the processes that were industrialized which allowed scaling up, removing the process from the home. Something I see in all this is that families moved into more urbanized areas and lived in close quarters which reduced the amount of space a woman would have for brewing. Also, the way food and goods were sold became a more centralized market economy which was frequently operated more by men.

An article that was heavily shared this week is from the Smithsonian and outlines how women brewers might have been one of the founding ideas that witches wore tall black hats so they could stand out in a crowded market, often had cats in their breweries for rodent control (still a common practice at some smaller breweries), would hang their brooms outside their doorways to let people know that beer was available at their residence and would often be seen standing over a big cauldron stirring their beer. The article goes on to explain that just as women were gaining a foothold in the beer markets of Europe, the Reformation kicked off. The Reformation pushed the idea of gender norms that were stricter and conformed to what they felt like women and men should be doing as work. It also condemned witchcraft. The Smithsonian goes on to write:

Male brewers saw an opportunity. To reduce their competition in the beer trade, these men accused female brewers of being witches and using their cauldrons to brew up magic potions instead of booze. Unfortunately, the rumors took hold.

While this certainly is an exciting connection, Downie cautions taking this information with a grain of salt:

There is argument by some against this interpretation as everyday women’s history has not been well-preserved. But the Industrial Age definitely saw women discouraged or barred from brewing and ramped up the male dominance and stereotypes we see today.

Where Are They Now?

Women brewers while nothing new, are still too often underrepresented in today’s industry, specifically on the brew deck. While only 7.5% of the breweries in the Brewers Association article were women, they represent 37% of “non-production, non-service” staff roles, and women make up 54% of the service staff.

One of the organizations that is working to bring women into the beer industry is the Pink Boots Society. Their motto:

We are here to assist, inspire, and encourage women fermented/alcoholic beverage professionals through education.

They hold chapter meetings all over the country, collaborate with breweries and hop companies on charity brews, highlight and create social media content that celebrates women brewers, and more. They are truly helping to change the face of brewing to one that is more female-centric and inclusive to people of all genders.

Very early we realized women were hungry and yearning to learn more about craft beer. Mujeres Brew House is that space we didn’t know we needed. Not only do women get to come and enjoy drinking beer but once it is safe again we will resume classes to learn all aspects of indie craft beer.

Davila feels it is important to welcome more women into the world of craft beer, especially minority women, and women have been incredibly responsive. Currently, they have had approximately 250 women from Southern California who have taken part in their meetings and educational nights.

Times, they are changing. According to an article by Imbibe, 11% of women drank beer more often than once a week in 2020, which is up from 6% in 2019. Slowly but surely, women are making their mark in the brewing industry again and while we have a long way to go, that’s certainly something to celebrate.