Beer Festivals: The More You Know 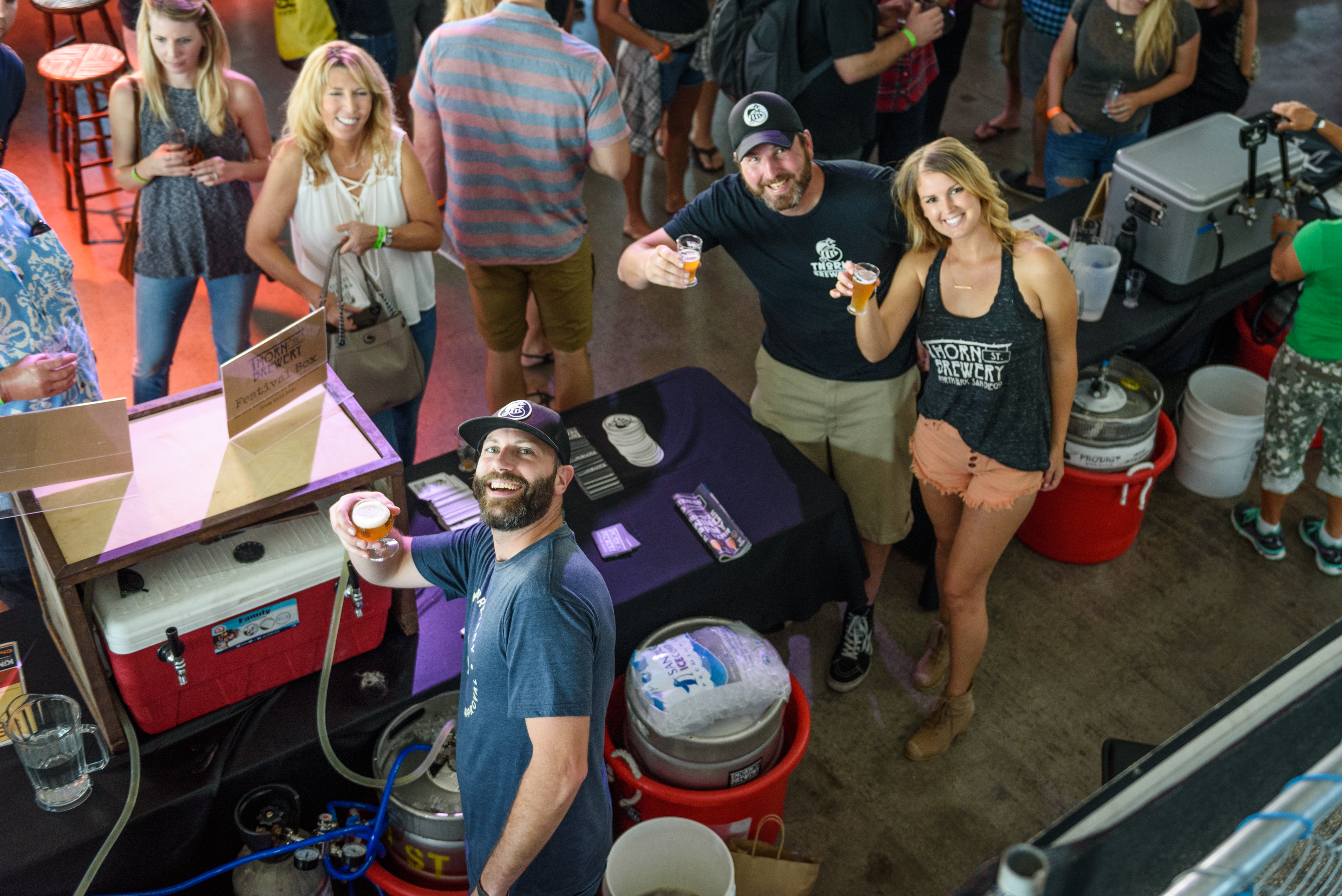 Beer festivals have been a hot topic in the San Diego craft beer community recently. Fun to attend and fun to work, these beer-centered events draw thousands of people most weekends throughout the warmer San Diego months. We recently wrote a blog about the different types of festivals out there, the issue we see with how some festivals are run and what we plan to do about it. This is a newer conversation for a lot of breweries because while beer fests have been running for some time, we are finally becoming savvy on the different types of festivals out there. Go and read the blog post now, and then come back here. If you didn’t do that, here’s a quick recap.

There are three types of festivals from a brewery’s perspective:

Hearing From a Festival Promoter

This past week, we (Jay Jones and Tom Kiely from the Thorn Street Brewery Sales Team) sat down with Robert Esparza from Pushpin Media to discuss this topic. Robert runs festivals that fall into that third category, specifically Mission Valley Food and Beer Fest and Bacon Fest. While both events are well run and a lot of fun for people to attend, we take issue with the fact that Robert asks for the beer to be donated yet he is making a profit far above what is given to the charity. Knowing we felt this way going into the conversation, we really appreciate him agreeing to sit down with us.

Robert is a nice guy and he was excited to share his perspective on festivals. He’s friends with a lot of people in the craft beer community and is well liked. In the live cast, he talked quite a bit about his beer connections, how he calls breweries “partners” rather than vendors and how he is a born and bred San Diegan who puts money back into the local economy. All good things.

The whole hour-plus-long live cast is really informative and you should definitely watch for yourself. You can start at 15:20 if you want to skip right to the good stuff. Ultimately, there were two main questions that we asked him.

Why don’t you pay breweries for beer?

It was only recently that we got to thinking, why are we donating beer to some of these festivals that are put on by an event promoter rather than the charity? It’s clear that event promoters make money or they wouldn’t make it their livelihood. We are not against promoters making money. They should be compensated for their work, their time and for the large upfront costs associated with running a festival. Robert told us the security gets paid, the bathrooms are paid for, the clean-up crew is paid, and the musical acts are getting paid. Our question was, why is everyone getting paid but breweries in this scenario? Why is it that breweries are supposed to take on that cost alone? Robert’s answer, and I’m paraphrasing here but you are free to watch his answer in the live cast, was that those other companies don’t do it for the exposure like breweries do and that he also doesn’t pay for the food at his events, so breweries aren’t the only ones not being compensated.

Let’s talk about exposure for a minute. Exposure might have been something breweries could benefit from if it were a few years ago when there were only 10 fests throughout the year.  Now that San Diego boasts more than 40 festivals every year, the value gained from exposure is questionable.

To his second point that he doesn’t pay for food either, we say, why not? In talking with other event promoters as well as restaurant industry people, there are festivals out there that provide stipends to restaurants. So we know it can be done, it just doesn’t fit into some organizer’s budget that they have made. In fact, in the live cast, Robert unequivocally said that the MVFBF and Bacon Fest will never pay breweries for beer. It’s tough to feel like a ‘partner’, as Robert describes our relationship, when he furthers the false narrative that craft brewers need to/should give away product for exposure. This narrative ultimately cheapens the value of our community’s brand.

Why don’t you want to pay breweries for the beer and then the brewery will donate that amount to the charity?

One thing that was brought up by both us and Robert is that many festivals are not transparent as to how much money is being donated to charity or even what charity is benefitting. For many breweries, this is a sticking point because if we are donating $300+ in product to an event, we want $300 to go to the charity. One way around this lack of information is to have the festival pay us for the beer and then we, in turn, donate that amount directly to the charity. Not only does this clear up any transparency issues, but it also allows us to write off the full wholesale cost of the keg vs. just the cost to make the keg. Robert was not down with this method either. He said, “From an accounting standpoint, the last thing I want to do is write 40 checks to breweries and then follow up with 40 breweries to make sure they donated.”

Looking at the Numbers

We spent some time researching beer festivals and the costs associated with them. We also spoke with event promoters who shared with us their numbers. We brought a festival cost spreadsheet to the show and Robert also brought his own and he mentioned on air how the numbers were very close. While he brought the spreadsheet to show how the am0unt he donates to the charity increases with ticket sales, we also saw some other numbers that made us think. Mostly, that the net income after they pay for expenses and give $12k-$23k the charities is more than enough to also pay $10k-$15k to the breweries for their product. If promoters are making $37-$71K per event, we feel they can afford to pay for the beer.

Furthermore, other festivals do operate this way so we know it can be done. They still make a profit, just not quite as much. Here’s a look at the numbers we came up with by talking to industry insiders and how it compares to Robert’s numbers:

For comparison, here are the numbers from Pushpins Media that Robert gave us:

Our hope in talking about this issue is that other breweries will start researching festivals just like we did. Of course, every brewery is free to participate in whatever festival they want to, but they should do it with all the information and a full understanding of how their donation is being used. Luckily, other craft beer communities have addressed this very issue to give us an idea of where to go next.  The New York State Brewers Association have a Bill of Rights that breaks down the different types of festivals as well as a declaration of rights that breweries should expect from festivals. Two rights that stick out to us are the second, stating that breweries should never provide free beer to a for-profit festival and the fifth which states that breweries have the right to proof of not-for-profit status and proportion of proceeds donated. Here’s the specific text for the second right:

“Breweries have a right to be fairly compensated for their beer. Beer festivals and events have become big business with high profit margins if run correctly. Festival and event promoters that ask a brewer or brewery to donate beer in exchange for the promoter, “exposing a brand to the public” or “getting a brewery name out there” are simply efforts designed to take advantage of the work, and energy a brewery has invested in creating its beer and brand.”

So to our fellow brewers, next time you are asked to do a festival and you aren’t sure who is profiting, just ask. Ask what the charity is and how much is being donated. If they are a for-profit fest and they aren’t willing to pay for beer, then really think about what you are getting out of the partnership. If you still want to do the fest then offer to pay the charity directly and ask to be paid, because then at least you will know how much of your donation is reaching the charity.

In the end, our stance hasn’t changed on the issue. We still are only going to participate in festivals put on by the Guild, charitable organizations and for-profit festivals that buy the beer. Considering we did 22 festivals last year, we will still have at least 18-20 festivals to participate in, which is more than enough festival exposure. If Robert ever starts paying breweries for their product then we will happily do his festivals.

We are going to be working on the next step which is to create our own San Diego Brewer’s Bill of Rights so that San Diego breweries have all the information needed to make informed decisions about festival participation.