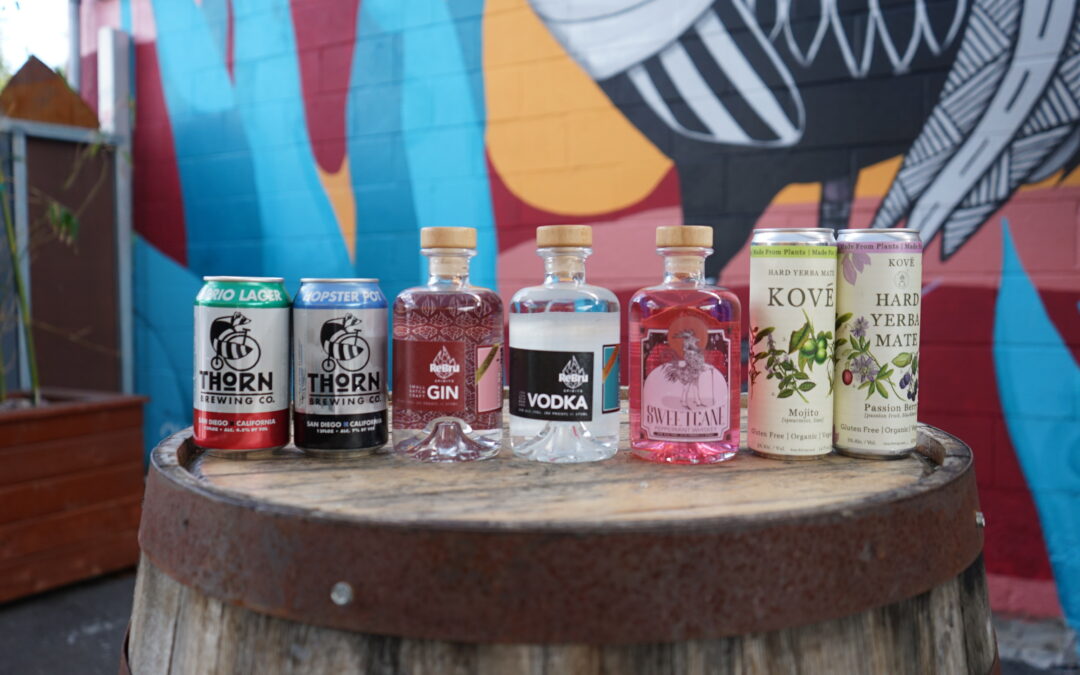 2020 was obviously a tough year for the beer industry as well as many beer-adjacent industries. When COVID first hit in March 2020, Thorn was putting approximately 65% of our beer in kegs for sale to bars and restaurants. While we began canning more of our beer when restrictions shut down on-premise eating and drinking, with so many restaurants shutting down or only offering food-to-go, they weren’t buying kegs anymore, as draft beer is not a big to-go item. Because of these shutdowns and restrictions, we ended up with some free tank space and got to thinking, ‘What if we brought in another company that could make use of the downtime our tanks had?’

Kové Hard Yerba Mate approached us at the end of last year looking for space to produce their unique hard-beverage. Kové’s Hard Yerba Mate is an organic, vegan, and gluten-free alcoholic beverage.

Kové’s process begins with a light Yerba Mate tea in a kettle by steeping yerba mate in hot water. Next, they add organic raw sugar cane to the tea. Once they have a sweet yerba mate tea, they cool the sweet tea and pump it into a fermenting vessel for fermentation where they add yeast and nutrients. Once fermentation is complete they flavor their hard yerba mate with organic juices, herbs, and spices.

Kové was created by a team of friends and innovators looking to create a simple transparent alcoholic beverage while harnessing the amazing qualities of Yerba Mate. Headed by CEO, Alex Montelbano, CCO Ryder England, COO Josh Makler, and sales manager, Dylan Ankeney, Kové brings years of experience from three of the four founders previously working for Juneshine Hard Kombucha before striking out on their own.

ReBru Spirits In the House

Also, during this last year, ReBru Spirits took flight in the same warehouse as, but the other side of, Thorn Barrio Logan. ReBru Spirits was started by one of Thorn’s co-founders, Dennis O’Connor, and uses out-of-code craft beer as the base for all of its spirits. Spirits usually use what is called “distiller’s beer” as their base which can be compared to cooking wine vs. wine that you would happily drink. Last March, when all the restaurants shut down and there was all of a sudden a huge surplus of craft beer that was sitting at breweries and distributors that would soon be out-of-code, O’Connor saw an opportunity to not only get a base product for his spirits but also help out the breweries by taking the beer off their hands. Starting off with just Thorn’s extra beer, they soon branched out to work with distributors to take their surplus beer off their hands. Brewers pay approximately $7 per barrel to legally dump it so when ReBru takes that beer off of their hands, it saves them money and saves that extra beer from the wastewater system.

Rebru’s mad-scientist is award-winning Master Distiller, Neil Lotz, formerly of Desert Distilling, who helped to create ReBru’s proprietary process that focuses on taking out the off-flavors that could come from hoppy beers (since hops aren’t usually a factor in the normal distilling process) while utilizing some of the more unique notes that would come from the craft beers.

ReBru was built on the idea of upcycling, best and better practices, and having less of a negative impact on the environment. Everything they use at ReBru is sourced locally when possible, organic when feasible, and repurposed when logical. They think about the footprint of each ingredient before using it in their spirits, while still delivering smooth and delicious vodka, gin, and whiskey.

What is coming out of these collaborations is that we are developing a ‘Producer Cooperative’ of sorts with Kové Hard Yerba Mate & ReBru Spirits. A producer cooperative is typically a business entity that farmers create to share the burden of marketing and selling their produce. We are taking this concept but applying it to the alcoholic beverage manufacturers that operate out of our building in Barrio Logan, which has been dubbed “The Acre of Awesome”.

While ReBru has its own space in the South West side of the building, Kové is currently operating in Thorn’s facility as an alternating proprietor, which means they have full access to use the building for their production needs. Additionally, we are working to carve out retail space for them so they can sell their seltzer-alternative product in a space that is unique to their brand.

By working together, we aim to share expertise between companies so we can be on the cutting edge of fun new alcoholic beverages and create a one-of-a-kind destination space in Barrio Logan.

The Acre of Awesome

Also housed in the Acre of Awesome, is SideYard BBQ by Hott Mess brought to you by O’Connor and the Home & Away crew including Chef Kenzo Inai and managing owner, Jonathan Frank. Last year, they scooped up local, legendary pitmaster Dave Kendall to headline their BBQ program. SideYard BBQ is the outdoor location for Hott Mess Wood-Fired Pizza & BBQ which has been unable to open as an indoor space for the last year. Once Hott Mess opens, the whole Acre of Awesome will be active and we can’t wait.

Soon, you will be able to come down to Thorn Barrio Logan, grab a beer, enjoy some hard yerba mate, pick up a bottle of hand-crafted vodka, and nosh on some legit BBQ and wood-fired pizza, all in the same trip. We’ll truly have something for everyone.

To get your hands on some Kové Hard Yerba Mate, you can head on over to their website https://www.hardyerbamate.com/ to get it shipped or you can find it in local stores.

Right now if you want to buy ReBru Spirits, you can get it online at www.rebruspirits.com or come to SideYard BBQ by Hott Mess every Saturday and Sunday and take a tour of the distillery while enjoying some damn fine BBQ. As always, if you want to buy Thorn, you can get it on our website here for delivery, at our tasting rooms, and throughout SoCal.