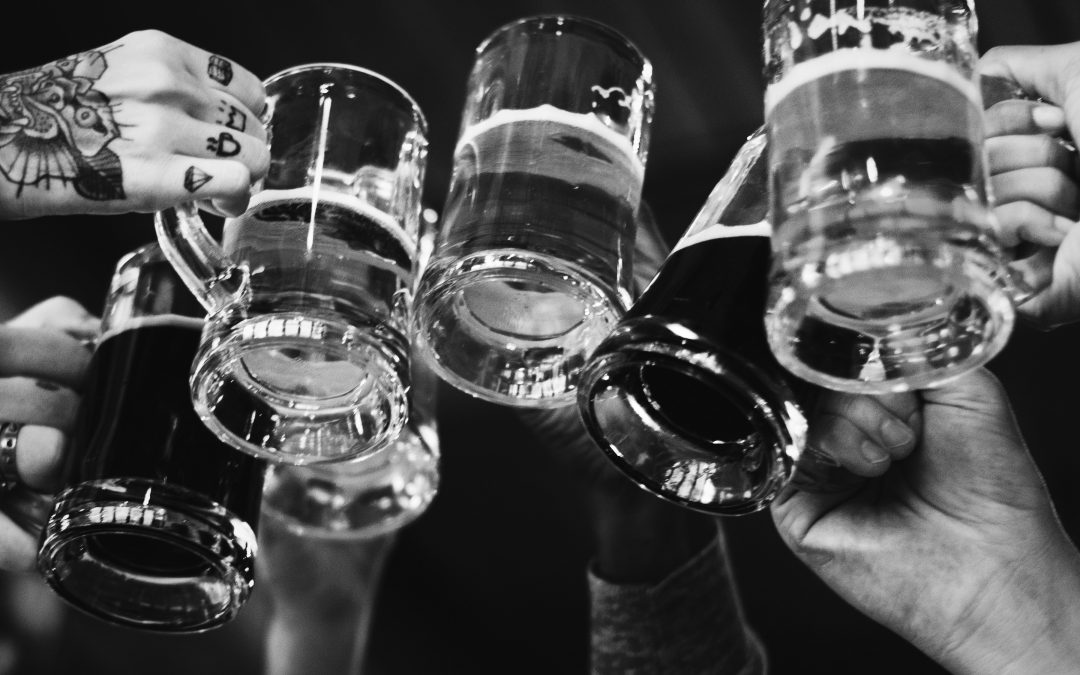 Mark Twain famously said, “There is no such thing as a new idea. It is impossible. We simply take a lot of old ideas and put them into a sort of mental kaleidoscope.” This is never truer than in craft beer. From names of breweries to beer names to logos, our industry tends to “borrow” not only from one another but also other industries. Sometimes the borrowing is on purpose for a punny beer name or graphic. Sometimes it’s because two people had the same idea for the name for their new hazy IPA. Sometimes it’s by accident when a graphic designer or branding agency doesn’t do their homework.

While this situation isn’t unique to the craft beer industry, it hits home when a local San Diego brewery, Burning Beard, recently posted on their Facebook page a message to L.A.’s Phantom Carriage Brewery:

“Burning Beard Brewing : Hi neighbor, people have been pointing out to us that your recent logo design looks a lot like our logo. There are several comments in your Facebook posts, so you’re likely aware of these similarities. Maybe you’re already changing your logo and will come out with a new one soon. Our lawyer is putting together a cease and desist letter – but we wanted to reach out to you personally first to see if we could work this out. Please take this opportunity to remove your confusingly similar logos from your website and Facebook account immediately, so we can tell our lawyer we’re working to resolve this directly.

Phantom Carriage has just undergone a rebranding of sorts and posted their new logo as their Facebook profile picture. Burning Beard posted this message on their own Facebook page as well as the image of Phantom Carriage’s new logo that they posted on their page on 8/8/19.

Then after receiving the feedback that it looked an awful lot like Burning Beard’s, Phantom Carriage posted this different version:

This second version while not as similar as the first still got people talking which is how Burning Beard ended up seeing the logo. Here’s where the trademark law comes in.

“If a party owns the rights to a particular trademark, that party can sue subsequent parties for trademark infringement. 15 U.S.C. §§ 1114, 1125. The standard is “likelihood of confusion.” To be more specific, the use of a trademark in connection with the sale of a good constitutes infringement if it is likely to cause consumer confusion as to the source of those goods or as to the sponsorship or approval of such goods. In deciding whether consumers are likely to be confused, the courts will typically look to a number of factors, including: (1) the strength of the mark; (2) the proximity of the goods; (3) the similarity of the marks; (4) evidence of actual confusion; (5) the similarity of marketing channels used; (6) the degree of caution exercised by the typical purchaser; (7) the defendant’s intent.”

On the Facebook post where Burning Beard posted their open letter to Phantom Carriage, there were some people questioning Burning Beard’s motive to post about it on social media vs. handling it privately. Based on the necessity of protecting a trademark, it’s completely understandable why they would make a public post about it. Also, from the language used in their letter to Phantom Carriage, nothing in their post indicated a vindictiveness or presumption of ill-intent.

Looking at item #4 above, “evidence of actual confusion,” it’s in Burning Beard’s best interest to use the Facebook posts to show that Phantom Carriage’s new logo causes confusion in the market place. If they didn’t defend it on the platform that where this confusion was taking place, it could count against them in a future trademark case.

That’s the funny thing about trademark law, it’s up to the trademark holder to defend themselves against the infringement and if they don’t, they risk losing their trademark:

“The United States Patent and Trademark Office does not police the use of trademarks by third parties. As a result, registered trademarks need to be defended at all times and mark holders must continually police marks for unlawful use by third parties. Failure to police a mark can result in the generification of the mark and a loss of registration rights.”

Trademark issues are a common theme in craft beer.  In March, Stone Brewing’s lawsuit against MillerCoors moved forward after months of nothing being reported as to the status of the suit. Stone is suing Keystone for trademark infringement for their brand redesign of Keystone Light. MillerCoors answered back with a lawsuit of their own saying that they actually have an earlier claim to STONE trademark than Stone Brewing does. The suit was greenlit to move forward based on a judge’s opinion that Stone has a “moderately strong” case against MillerCoors for trademark infringement, though they also decided that it didn’t deserve an injunction to stop Keystone from using the marketing until the case was settled.

Perhaps one of the most well-known trademark lawsuits was when Lagunitas sued Sierra Nevada over their use of IPA on their Hop Hunter label.

In their suit, Lagunitas claimed that confusion would likely be caused because of the font (Serif), narrow spacing between the letters, and a “slightly aged and weathered look” in the lettering. This suit got nowhere fast when the beer community and twitter-verse quickly came to Sierra Nevada’s defense and Tony Magee, the owner of Lagunitas at the time, dropped the suit the next day.

In Lagunita’s case, both businesses were distributed on a national scale. In Burning Beard’s case, it’s a much smaller footprint, but no less important to their business. While some of the people flaming Burning Beard for defending their trademark stated that because BB is in San Diego and PC is in L.A. there is no way that confusion could be caused. Distribution prints are always larger than their local area and with both breweries expanding, it’s absolutely likely that their beers will overlap in the same market even if they don’t at this point.

Hopefully, like most of these trademark cases, this can be handled outside of an expensive lawsuit. In all likely-hood, Phantom Carriage had no idea that their new logo was so close to Burning Beard’s logo. Like most breweries going through a rebrand, they probably used an advertising/branding firm outside of the industry which didn’t do their due diligence when sourcing the new logo.

A couple of days ago, Phantom Carriage took down the two new versions of their logo and put their old logo back up, hopefully, to go back to the drawing board.

As the craft beer space gets more and more crowded, trademark disputes will likely continue and hopefully, breweries will be able to work things out before lawyers get involved, usually at an exorbitant cost to the often small businesses. After all, we are all in this craft industry together; a unique industry built on collaboration, creativity and pooling resources and ideas.