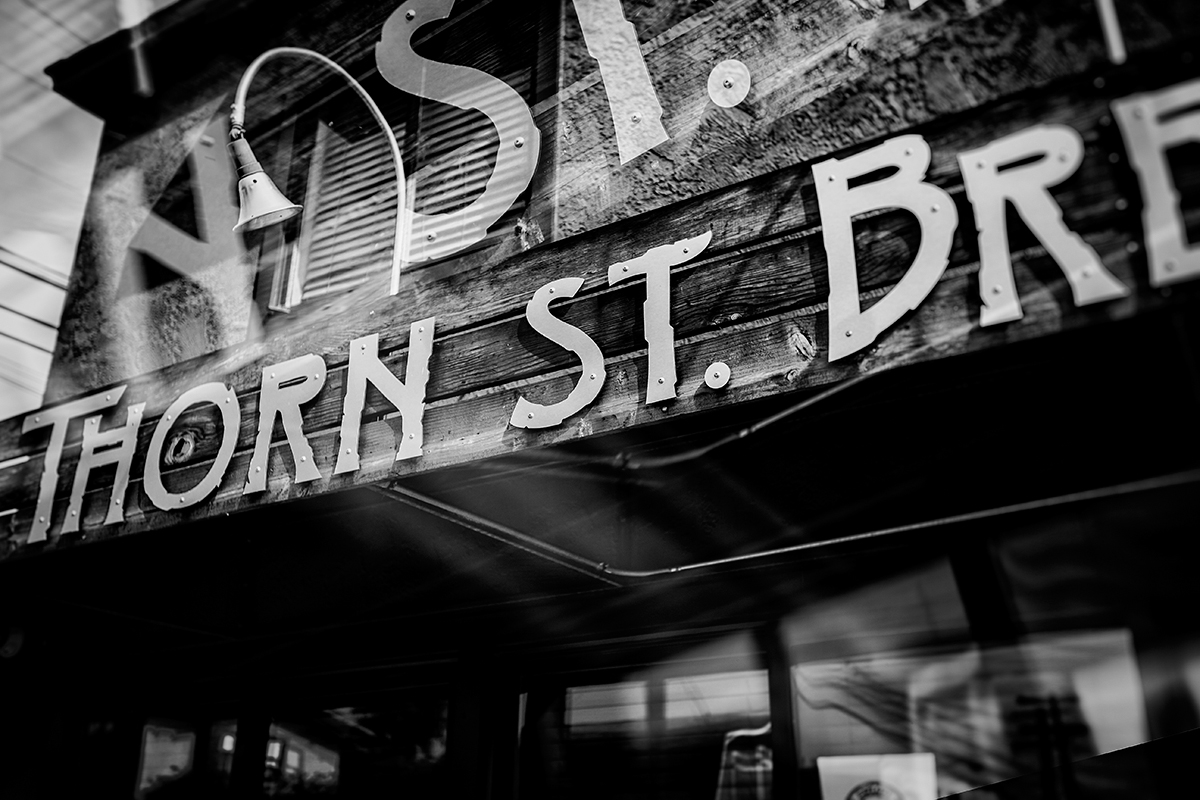 Six years ago, three guys had a dream that they could create a place in their neighborhood, North Park, that would serve not only as a social hub and community gathering spot but also as a place for locals and visitors alike to grab a quality craft beer that was made right at the source. We’ve come a long way since we first opened our doors during the 2012 SoNo Fest and Chili Cook-off and now our beer can be found throughout Southern California in cans and on draft and we operate a 30-barrel production facility in Barrio Logan. First of all, thank you, to all our patrons and friends who have graced our tasting rooms with your presence over the years and purchased our beer around town. Without our core fans, the growth that we have experienced wouldn’t have been possible. We are truly grateful for our patrons as well as the local shops, bars, and restaurants that carry our beer every day.

We’ve had an amazing six years so we thought we would compile some of our staff’s favorite memories from working at Thorn that illustrates just how special this community is to us and for everyone involved.

I can’t believe that it has been 6 years. I still remember the first 6 months when I spent a ton of time behind the bar and we had to serve everyone tasters since pints weren’t yet allowed in tasting rooms. People who just wanted a beer would have to order a flight of that one style. Let’s just say that dish duty was next level. 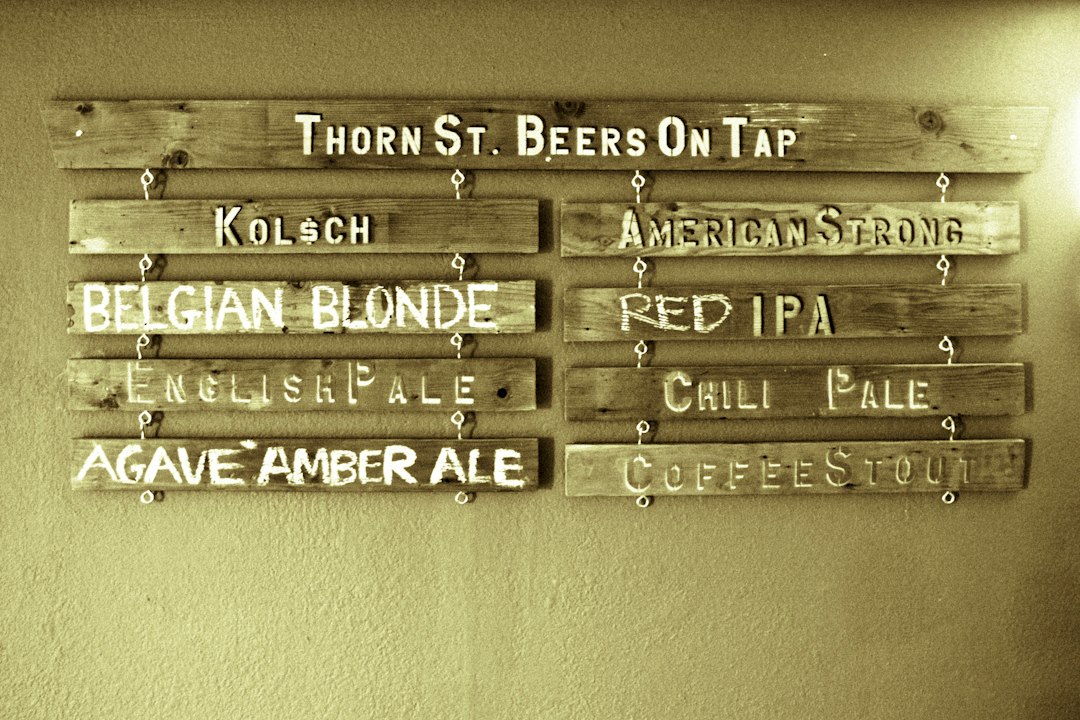 Other fun memories include our first award/medal for our Pilsner, buying my first six-pack at a convenience store, getting pictures by friends/fans when we made it into Costco, and drinking Barrio Lager instead of Tecate on Baja on surf trips.

It’s been a great run! Our original location in North Park is a staple in the neighborhood and active in the community, and our expansion into another amazing San Diego neighborhood, Barrio Logan, has been a great experience. Very happy to be in both of these locations and able to get our beer out to the rest of San Diego. Thanks to everyone out there that supports Thorn. Cheers!

My favorite memory was being invited to pour beer at the Single, Wet, and Wild hop festival at Sierra Nevada in Chico, CA.  Visiting the mecca of Craft Beer (for me anyway) was something I always wanted to do but had never gotten around to.  They threw us all a welcome BBQ and kickball game next to the Sierra Nevada hop fields and poured us a ton of fresh Celebration Ale, one of my all time favorite beers.  I don’t think it was for sale in stores yet, just a really great experience although later that night Tom (Kiely, Thorn Brewing’s GM) and I both had dead cell phones wandering the streets of Chico looking for a cab and trying to remember where our hotel was! 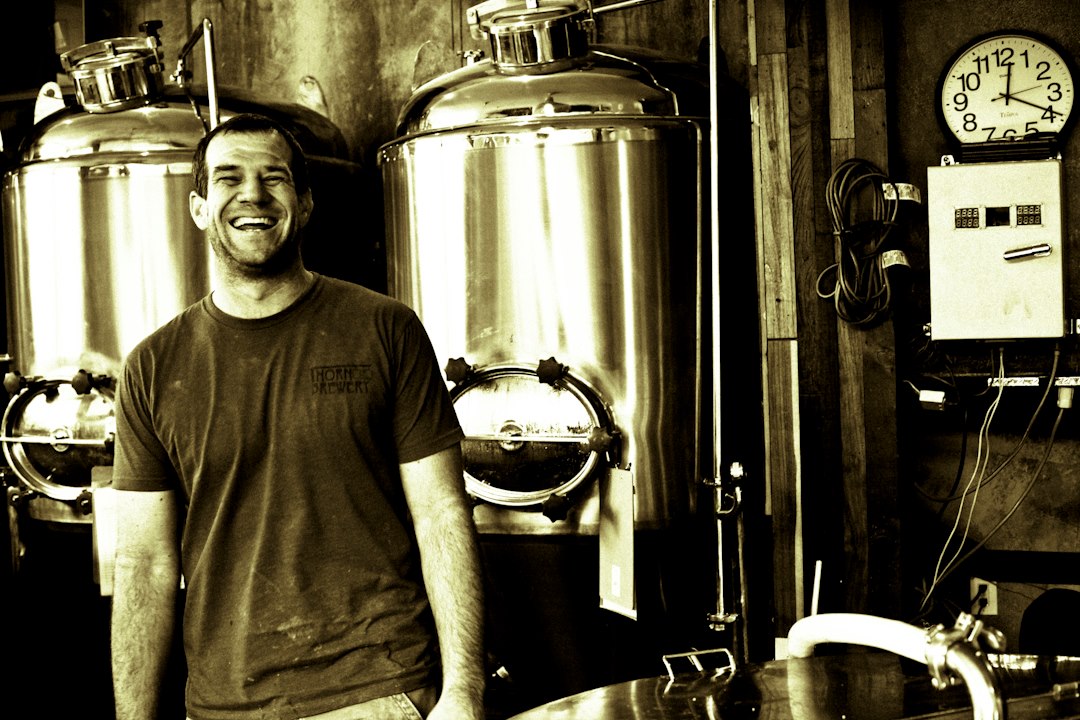 I would say the best thing about starting Thorn Street Brewery has been all of the relationships that have been developed over the last six years. Relationships with employees, customers, the craft beer industry and most of all, the community as a whole is what I love most about being involved with Thorn. I feel we truly are a neighborhood brewery where people congregate and feel a sense of community, even outside the brewery through fundraising and sponsorship of worthy local causes. 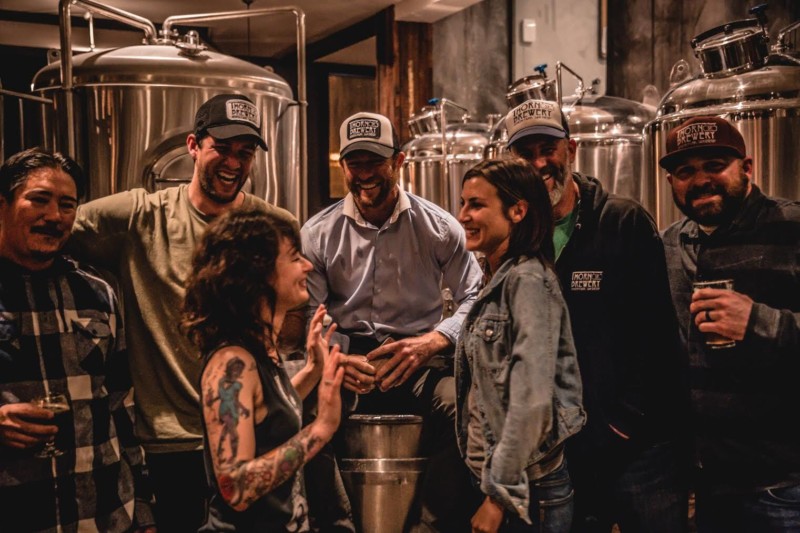 Anna (Brigham, Marketing Director) walking into the brewery in 2016 asking if we won some sort of beer competition because we got tagged in a tweet by the West Coaster. I looked it up and saw it was the World Beer Cup for our Imperial Red Ale, Alpenglow (though it was named December Nights at the time of the competition), we forgot about it and didn’t know they were announcing the winners that day. I tried calling the brewers, Scott Smith, Eric O’Connor, and Shelley but they had an early brew day so they all went out drinking after and weren’t coherent enough to have a conversation about it. Then Cosimo Sorrentino (Monkey Paw’s Head Brewery at the time) whipped around the corner and picked me up, turns out 30th street cleaned up as Thorn, Monkey Paw, Fall and Hess all medaled!

Another funny one is when there were a few bars telling me that Budweiser was telling them to not serve our beer because we snitched on them to the ABC. (Hilarious considering their “proof” was this blog that we wrote about AB InBev getting fined for pay-to-play activities after a year-long undercover investigation. All info Anna pulled was just from googling articles pertaining to the investigation)

Every Carnitas Snack Shack Brunch has been amazing. Great group of guys to have cook for us. Always lookin’ forward to the yearly release of Brother Scottys IIIPA and the Thorn Street Golf Tourneys throughout the years have always been fun times! 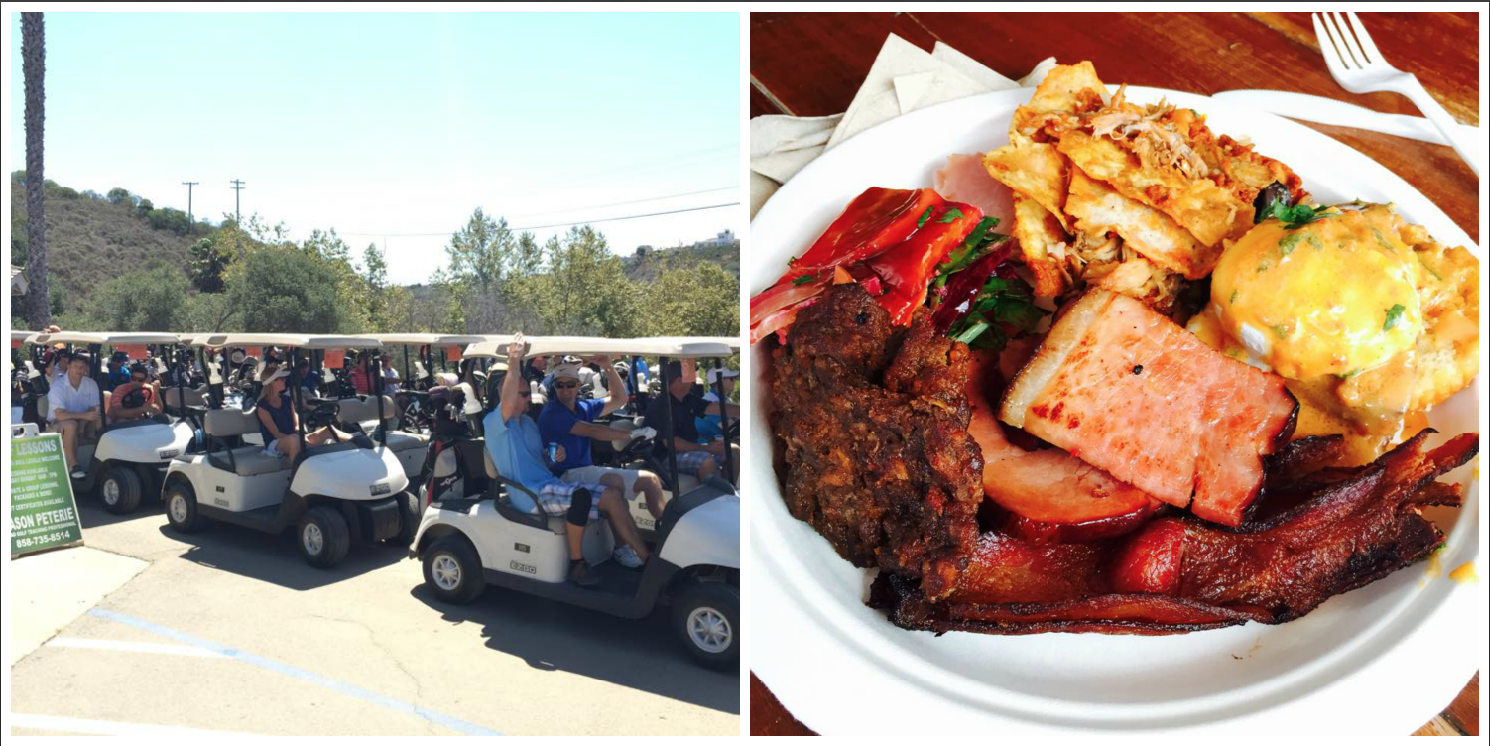 The first time I met anyone from the Thorn crew was when Jay Jones (Sales extraordinaire) and Tom crashed Thr3e Punk Ales Beer for Breakfast at 91X. I didn’t know it then, but that was my introduction to the Thorn Tribe. (If you don’t already, tune into 91X every weekday morning and hear Danielle chat it up along with the rest of the crew from the Moug Show)

One of the things that make the tasting room in North Park special is the regulars. Thorn Street really is a neighborhood brewery and the relationships I’ve built with regulars over the past year is something special that I’ve never experienced anywhere else I’ve worked. John’s homemade pickles, Tony bringing Max in for snuggles, Dave bringing in Moose, Chris bringing in Clementine… Okay, maybe it’s the dogs that I love the most about our regulars. Haha. But seriously, the regular patrons of Thorn Street don’t view us as just beertenders, they take interest in our personal lives and that’s something truly special.

I have so many great memories of Thorn over the last four years. The first thing that sticks out to me is all of the fun events we collaborate on with local vendors like Nomad Donuts, Venissimo Cheese, and Carnitas Snack Shack. My favorite event (which is hard, it’s like picking your favorite kid) has been the Vagina Monologues, first held at Thorn Street Brewery in 2016. We packed the upstairs and with the talented Coe Hennessey helming the production, it turned out to be a magical night that raised more than $1000 for Planned Parenthood. Then last year, we took the production down to Thorn Barrio Logan to the next-door warehouse where we had nearly 250 people packed in for an exciting night filled with love and support from the audience and cast members. That year, Dr. Bronner’s hopped on board and were a huge help in the production department and with the expanded space allowing for more attendees, we were able to donate more than $2000 to Planned Parenthood. This year, we are doing it again, so stay tuned and mark your calendars for the best Valentine’s date night in San Diego!

Another favorite memory is from the July 2016 blog I wrote about Thorn Street selling to Disney for $10 million. I couldn’t believe how many people believed the headline and the reactions ranged from them congratulating us to being excited that they can get a slice of Disney in North Park to people hating the idea and calling us sellouts. It was a great lesson in the fact that people really only read headlines because if any of them had read the first paragraph, they would have immediately recognized it as satire. I also wrote that it was a joke at the end of the piece but it still caught on like wildfire, was read by more than 20k people and it has been referenced years after the original post.

My favorite memory and probably the thing that changed my life was when Tom walked into Crushed in PB with Dan expecting to see a couple Thorn handles on, but was met with a Fall Brewing tap takeover that had occurred the night before, so Dan and Tom convinced me to do a 22 tap takeover (every faucet Crushed had) that was the beginning of an amazing relationship between Crushed and Thorn, and a relationship that we have all benefited from.

When I first started my sales route, in 2015 I think, I was doing a ride along with Dan and I took him to PB so he could meet a buyer named Jay Jones at Crushed. It was one of the few bars that almost always had our beer on. We showed up and not only was our beer not on, but the new brewery that just opened up down the street (Fall) had four on. I felt like a dink, so when Dan went to pee I told Jay of the situation, not that he did anything wrong but just how the timing was bad. Jay then asked if I wanted to do an event with 5 beers, I said how about 22 (because they had 22 taps) and he didn’t hesitate…“let’s do it”. The event was a blast and ended up being the moment that led to Jay joining Thorn!

There are so many great memories over the last few years and this year will only add to them. For our 6th Anniversary, we are releasing one of our OG beers in cans for the first time. Saturday, December 1st, we are celebrating with cans (and draft) of Red Headed Hop Child, a hoppy red ale. So stop by 12-3 pm for drink specials, a sweet deal on six-packs and to say hello. Cheers to Thorn turning six! 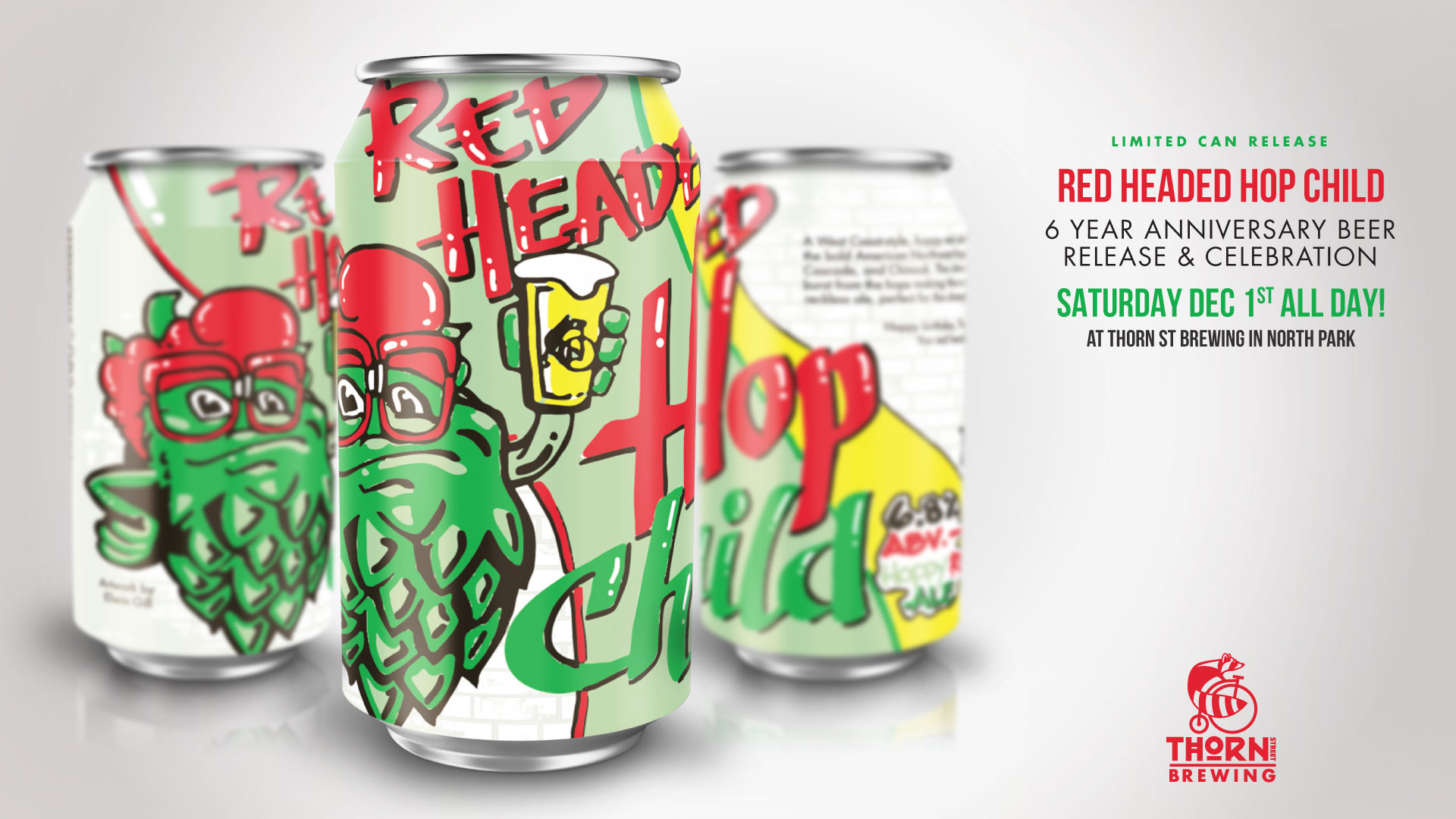