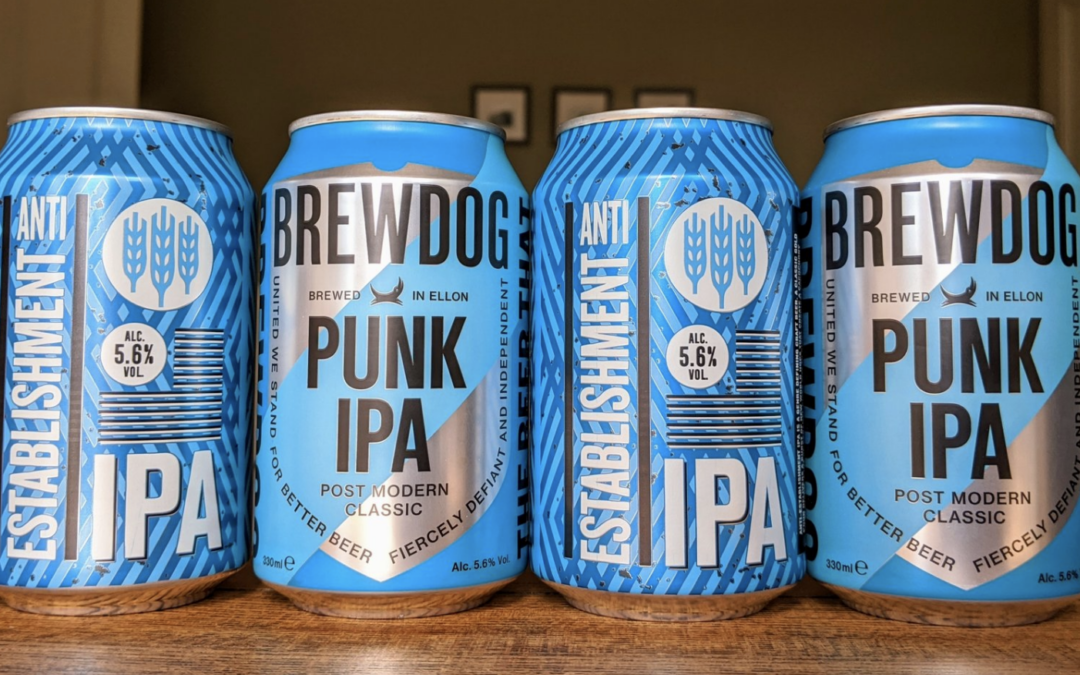 Trademark disputes in the craft beer industry are nothing new. From Lagunitas’ 2015 suit against Sierra Nevada for their use of capital letters on their IPA label (which Lagunitas dropped after the public backlash) to Patagonia suing AB InBev for their same-named beer and similar branding, breweries, just like any businesses, often need to protect their hard work and brands.

Closer to home, Stone Brewing sued MillerCoors in 2018 for their use of STONE down the side of their can in their marketing for Keystone Light. Then more recently, they were in the news for sending a “Petition for Cancellation” to a small, 3 bbl brewery in Kentucky for their use of ‘stone’ in their name, ‘Sawstone Brewing Co.’

A couple of weeks ago, the topic of trademark infringement was brought up again, this time concerning one of the fastest-growing grocery chains in the country, Aldi. Aldi has a history of blatantly and boldly, ripping off popular brands to create their own store brand version.

While many San Diegans are just beginning to discover Aldi since they opened their grocery stores in SD county within the last two years, they have been a staple in many European countries for decades. Aldi is a German, discount grocery store, that specializes in knocking off brand name products and offering their own near look-alike products at much lower prices. They don’t often carry the brands they are copying so, in essence, they have created a whole inventory based on this practice. Here are some examples:

Aldi’s tagline is “Like Brands. Only Cheaper.” and they live up to this promise by reducing pricing on all of their house products. Both of these items above are significantly less expensive than their brand-name counterparts. Best Foods Mayo is $3.48 and Aldi’s version is $1.99 (42% reduction in price) and the Pop-Tarts are $2.59 to the $1.85 pricing on Aldi’s Toaster Tarts for a 39% less expensive price.

A little interesting side-history here, Aldi started out in the early 1900s in Germany, which is home to 4000 of its 7500 stores worldwide and was run by two brothers who inherited the store from their father. In the late 1960s, the two brothers had a disagreement on whether or not the stores should carry cigarettes and they split up the stores between them. One brother took Aldi Nord and the other took Aldi Sud. Aldi Nord covered Northern Germany and some of Europe and Aldi Sud took Southern Germany and the rest of Europe. While they operated independently, they kept similar marketing, branding, and products as to not confuse people.

Then in the 1970s, Aldi Sud broke into the U.S. market and Aldi Nord bought the American grocery store, Trader Joe’s. While Trader Joe’s has always operated as a separate division of their parent company it is interesting that both grocery stores are discount stores that go about it in a completely different way. While Aldi shows no shame in toeing the line of trademark infringement with its products, Trader Joe’s instead creates its own brand of popular products and puts its own clear branding on them. There is no intention for people to think that the TJ’s version of a product is the same, consumers are just expected to notice that the product is similar and with Trader Joe’s solid reputation for their products, this seems to work for them exceedingly well.

As you can see, Aldi, very purposefully used a similar color palette, a similar font, and a similar graphic of a lime. The intention is for people to reach for this beer on the shelves because people have seen and enjoyed a similar item out in the market already. Add this to the fact that they charge way less for their own brand (their Key Lime Sour sells for about $6.99 per six-pack) and it definitely leaves a bad taste. A few weeks later, Aldi did it again with Brew Dog.

You can see from this photo how similar these two beers are along with the thesaurus-gleaned name, Anti-Establishment IPA vs. Brewdog’s Punk IPA. Not only does Aldi copy the name and look, but in all their beer knock-offs, of which there are many, they also have the exact ABV of the knocked-off beer. You can see for yourself by heading to this article by Thrillist that ranks the Aldi beers and shows the breadth of their rip-offs.

So how is it that Aldi gets away with these brand copies and not lose the suits that are brought against them?

How Aldi Gets Away With It

First of all, Aldi gets sued quite a bit. They have been sued by Frito Lay, Kings Hawaiian, and most recently Bath & Body Works, to name a few. Aldi must have a busy legal team and with their deep pockets, they are not afraid of fighting the suits. While they win a majority of their cases, they also quietly settle some. Aldi settled with Kings Hawaiian and part of that settlement was changing the branding on the Aldi product. Bath and Body Works suit is still open so we will have to see how that goes down. Their success in these suits has emboldened them while also discouraging other companies, who often don’t have the deep pockets of Frito Lay, to bring their own suits against the discount grocer.

Aldi knows how to walk a fine line on trademark issues. First, they always make sure that the names of the products are just different enough to not fall under the original brand’s trademark. Cheezy Twists (Frito Lay) vs. Twisties Cheese, Best Foods vs. Burmans, etc. Then, they also know that courts, in general, want to avoid giving companies “monopoly rights over colours, designs and product shapes, an outcome that might lead to “anti-competitive practice.” So they use a similar color palette, fonts, and imagery, but in a general enough way that they have been successful in most of the suits brought against them. Aldi bets on consumers being reminded of the brand name product when looking at their knock-off but knowing that they aren’t actually buying a product from the original brand. So far they have been incredibly successful in their practice of this.

They Get Help: Contract Breweries

Aldi is the grocery giant but they can’t pull this epic knock-off-fest by themselves. They contract with companies to make these versions. When concerning Aldi brand beer, it’s a little murky to find out where they brew their beer. When Aldi’s Key Lime Sour was released and all over the news, I reached out to Aldi to ask where it was brewed, thinking maybe they contracted with Dogfish Head to brew a similar beer under their brand. Here’s what I got:

Well, with a little internet sleuthing (ok, it was the first result) it turns out on Untappd you can find out a lot of info. Key Lime Sour is brewed under the name State of Brewing which shows as a subsidiary of Octopi Brewing out of Waunakee, WI. State of Brewing is also responsible for Ryder No. 8 Blonde Ale with a striking resemblance to Firestone Walker’s 805 Blonde Ale:

Let’s take a look at Octopi Brewing. Octopi Brewing started out in 2015 and right away established itself as a contract brewery. While in its first year, it had one client that made up 40% of its production, now they have 17 clients that they brew for, with none holding more than 8% of its business. In 2019, they went through an $11 million expansion that tripled their footprint and added a canning line that can handle filling 350 cans per minute or 8000 cases per day. Octopi’s website is laudatory in how it treats its clients and all the services they provide from design to merchandising to beverage recipes to supplier selection. There is nothing inherently wrong with contract breweries. Lots of breweries do it when they have reached their capacities and still want to continue to grow. In fact, Thorn contract brewed at Mission Brewery while waiting for our Barrio Logan production facility to be finished.

Octopi Brewing is also listed on the Brewers Association website as being an independent, craft brewery. That’s a hard pill to swallow in this situation. While they are independent and enjoy the benefits of being able to call themselves that, they are also helping out a multi-billion dollar grocery store rip-off other independent breweries. It feels like it goes against the nature of craft beer, but that’s something we all would probably do well to remember. At the end of the day, it’s all about the money. Octopi is doing very well in their business practices as is, so really, why would they stop working for Aldi?

In the end, Aldi couldn’t pull off these brand-rip-offs without the help of companies that produce their products. It’s a shady business practice, even if it’s legal. Aldi is hopping on the backs of successful breweries who have worked their asses off to sell their beers and build a brand. They are nearly untouchable because most companies don’t have the resources to fight Aldi and they know this. They carefully design their brands to give the impression of a more well-known brand without causing “brand confusion.” Then they quietly settle the suits that don’t pan out for them, trumpet their legal wins to dissuade others from suing, and then are onto the next product that they want to copy.